Faith Demonstrated - Go Out and Buy a Field

What would you do if in a war you were asked to buy a piece of land in the middle of the battle zone?

I have been reading through the book of Jeremiah and he has done some crazy things. He had to wear a ruined girdle and another time put on a oxen's yoke. Now in chapter 32 he is being held as a captive in the courtyard of the palace while the Babylonian army besieges the city of Jerusalem.

Let's set the scene. The Babylonian army has Jerusalem surrounded. The Jewish king and his court along with all the inhabitants are shaking in their boots.  Jeremiah has been going around telling everyone that Jerusalem would fall. Now as Jerusalem is falling Jeremiah buys a piece of land from his cousin,  Why?

Because Jeremiah knew God. His purchase of the land demonstrated his faith in God. In spite of the hopeless situation in which he found himself, He bought this field as an investment of hope in the future of Israel.  God assures Jeremiah in verse 15: "Houses, fields and vineyards will again be bought in this land." Sometimes we have to step out and demonstrate our faith in God for the future. 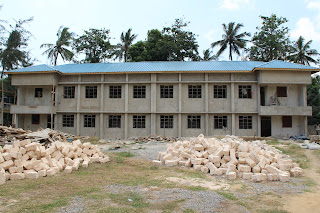 We are happy to report that we are finishing the female dormitory at the high school.  It has been a long road but next week our female freshman students will move into their new home. It will help these young women to excel in their studies. Everyone is excited and we are so thankful to all who gave to make this building a reality.

But we don't want to forget the young men. We needed to go out and buy a field. As a step of faith, the foundation now owns a separate piece of land near the high school for the future.  We are hoping to one day build a male dormitory plus four classrooms on that property.  We ask you to pray for us as we seriously consider how we can expand for the future of the students that we serve.

With God's help and faithfulness we will be able to meet the needs of all of our students.


Posted by Bobby Bechtel at 1:09 PM No comments:

The Hope Foundation of Kenya